Acid attack on women: a new face of gender- based violence in India -  Swastika Sruti 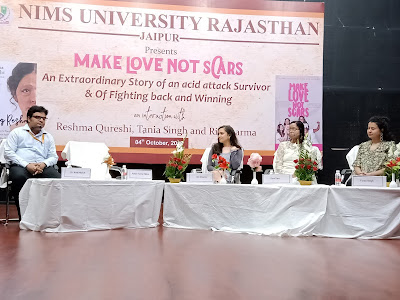 Jaipur: Acid attack in women is a burning issue in the present scenario. It is the most heinous form of violence against women, with an intension to disfigure, maim, torture or kill brutally. It has now become a worldwide problem irrespective of caste, gender and religion.

Make Love Not Scars is an Indian nonprofit organization based in New Delhi which works for acid-attack survivors founded by Ria Sharma. It assists with the complete rehabilitation of acid attack survivors, including providing survivors with financial, legal and educational help.  In a session with students and faculty of Nims University, Jaipur this organization brought up Ria Sharma, Tanya Singh and Mrs. Soni (the victim) as  the panelist in the seminar talking and sharing about acid being  used as a weapon, and most of the victims are recognized as women. The seminar hall included a personality who could empathize with the topic as there was Mrs. Soni, an acid attack survivor form Uttar Pradesh. She unfolded her instance of how her happy growing life turned to make her question herself on her look.  After her 12 she cleared her civil service examination and also perceived an opportunity for job but due to her marriage that in between ruined her life. “mai samaj me nahi bharosa karti”, (I don’t believe in society) says Soni.

It won’t be valid saying marriage ruined her life but the old believes i.e ‘dowry’ made her come across disgruntled look by just one blast of acid on her face for the rest of her life.

Like Soni there are many ladies who are struggling with this weapon as she refuses to accept the proposal or didn’t carry suffs like dowry, etc. Some of the the lucky cases are recognized and are taken to some NGO’s helping them but many are left unseen and dies.

Ria, the founder when asked that after so many other hobbies, how come serving people became a passion?   “As usual I was asked to travel the path of doctor or engineer but since I was not that good in studies so thought of taking fashion designing, by this time the whole world with me was stunned by the Nirbhaya incident , everyone was doing something or the other but I as a sympathized sister was not contributing anything. This disturbed me. Though I was not doing good in my course and then came across terrible news on acid attack.”
This led to come up with helping the victims and taking a step towards comforting the acid attack survivors to a society of acceptance.
For coming up with anything brings challenges with itself so both the founder and the CEO (Tanya) are at good level now with breaking all the challenges on way.

“What everyone in this room can do to reduce this attacks and make the survivors free to live all together?” asked an audience in the closing sessions.

Ria answered that talking about this in public and also exchanging words and experience with the victims will help the understand and rely on the society, and moreover we cannot have a successful feminist movement without men.

Many a times its noticed that the further victim when threatened goes to police station and aware the police about it but no actions are taken by the team so it continues.

Make love not scares came from a documentary made by Ria but turned to a NGO.  Acid attack has just disfigured one’s look but not their heart.

Mohit Batra , the actuator of the event made the concluding speech and assured the diversified minds that is created by reading books and asked to read the “Make love not scar”.

Acid attack on women: a new face of gender- based violence in India -  Swastika Sruti